I mentioned in last week’s Friday Five the crockpot jambalaya we made to watch during the Redskins season opener and someone on Facebook asked for the recipe. 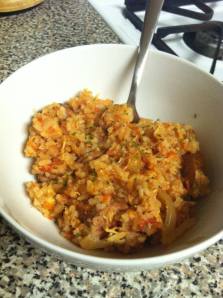 The basis was this AllRecipies version that I found, but we made some tweaks. Here’s our version below.

1 pound of chicken (we used tenders, but breasts or thighs would work too), chopped in to 1 inch pieces
1 big link of smoked turkey sausage (which we used instead of andouille, but feel free to use it), chopped in to 1 inch pieces
1/2 pound of shrimp, peeled and with the tails off
1 28oz can of diced tomatoes (you could use plain or fire roasted)
1/2 large onion, chopped
1 cup of chicken broth (or water)
2 tsp dried oregano
2 tsp Cajun seasoning (We used Zataran’s)
1 tsp cayenne (you could use more if you like it spicier)
1 1/2 to 2 cups cooked rice (we used a rice cooker) or 1/2 to 1 cup uncooked rice

1) Combine the chicken, sausage, onion, tomatoes, chicken broth and spices in to a crock pot. Cook on low for 8 hours or high for 6. Check on it every once in awhile (if you can) to see how the seasonings are coming together and feel free to add more spices.

2) If you are going to cook your rice in the crock pot, add it with an hour left. If you are cooking your rice separately, start the process at about the same time.

3) Fifteen minutes before serving, add the shrimp. Cook them until their are pink.

5) Serve hot. Garnish with parsley or Tabasco if desired.

Be warned: this recipe makes A LOT. We had two friends over and the four of us each had multiple helpings AND we still had leftovers. But it was delicious. Eric and I decided it was probably about a 4 SPORK rating.

And since I am sharing, here’s the recipe for what I made on Monday night. I was inspired by this Real Simple recipe. The big change I made here is how I cook the gnocchi. Instead of the traditional boiling, I crisp it up on a pan a la Iowa Girl Eats. It is delicious and much quicker than waiting for water to boil.

1) Split the olive oil up between two pans. Heat both over medium heat.

2) In one pan, dumped the package of gnocchi. Make sure the pan is big enough so the gnocchi can sit in one layer. This helps maximize the crispyness and minimize the cooking time. Let them sit for 3 to 4 minutes until they begin to crisp up on one side and then stir. Keep cooking and stirring until the gnocchi get browned on each size. At this point they should look more like tater tots than gnocchi, but they should still be tender on the inside.

3) While the gnocchi is cooking, put the yellow squash in the other pan. Add the chopped garlic along with some salt and pepper and cook until the squash is almost tender, about 6 to 8 minutes. Then add the chopped tomatoes and stir. Cook until the squash is tender and the tomatoes have cooked and wilted. It is OK if there is some liquid from the tomatoes in the pan — it will be a good sauce for the gnocchi.

4) Dumped the squash and tomatoes in to the pan of gnocchi and stir until combined. Scoop servings in to bowls and top with goat cheese. Eric and I both like A LOT of goat cheese so we put on a decent amount, but use your discretion. Top with ripped or sliced basil leaves.

Some variation of the above dish is one of our go to meals when we are looking for something quick. I always try to have a package of gnocchi in our pantry. I am a big fan of homemade gnocchi as well, but for the purposes of crisping, the store-bought kind works best. You could also serve this with a traditional red sauce or a pesto if you wanted, or even an olive oil and parmesan sauce instead of the using goat cheese. One you get the technique of the crispy gnocchi down, you can make it however you want.

One thought on “Recent recipes”