Fair warning — this week’s Friday Five might be sort of lame. Well at least part of it. Some weeks are just better than others.

1) Totally obsessed with grilled fish at the moment. Between the soy and brown sugar salmon we made last week and the pesto mahi mahi we made this week (both marinades discussed more in depth here), I just want to make all seafood on the grill now. It just gives the fish such a depth of flavor. I think next I want to try out some grilled shrimp skewers. The only issue is that the fish sticks to the grill like CRAZY. If anyone has any tips for avoiding this, let me know.

2) I try not to keep a lot of sweets in the house because, well, I don’t have a lot of self control and I have one heck of a sweet tooth. That is why when Eric came home from the grocery store with this, I knew I was in trouble. 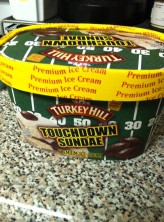 IT IS SO DELICIOUS. Chocolate and peanut butter is one of the best combinations of all time and this ice cream does it perfectly. The little chocolate-covered peanut butter footballs are the best. Apparently it is limited edition, so you should check it out while you still can. BRB, off buying six more gallons…

3) Fall officially beings on Sunday. We’ve even had a few chilly evenings here in Atlanta. It has really put me in the mood to whip up some delicious fall treats. Mostly this apple crisp with pecan topping and these pumpkin spice biscuits. Eric has mentioned a trip up to north Georgia to do some apple picking so that crisp might be happening in the near future.

4) On the fall track, I just wanted to update everyone that I have yet to have a PSL from Starbucks. Tuesday was the first day I was really tempted…it was overcast and a tad chilly here and I had an appointment right across the street from a Starbucks. But I was strong. I think I have made it this far so barring an incredibly cold snap, I will make it until October. But you best believe I am going to Starbucks on October 1st, regardless of the temperature.

5) I think I am in the market for a mezzaluna, strictly for the purposes of making salads a la Chopt. I just love how everything in those salads is so finely chopped and mixed together. It is delicious. Despite my best efforts with a regular ol’ knife and fork, I can never replicate the results. For those who are wondering, this is a mezzaluna:

It kinda looks like a medieval torture tool, but it would help me make amazing salads.

There was an error retrieving images from Instagram. An attempt will be remade in a few minutes.