Cooking is all about making mistakes. Sometimes you have to test recipes a few times before you get the desired result. Sometimes you just aren’t thinking straight. Over the weekend, that was me.

It has been nice and warm here in Atlanta lately — time to start firing up the grill. Eric and I were in the mood for coconut shrimp so I figured, hey, how hard could it be? I’ve made them before in the oven with great success so I just followed the same recipe.

Welp, I didn’t think about how coating shrimp in flake coconut might not be the best idea on the grill. About 30 seconds after I put the skewers on the grill, most of the coconut had fallen off the shrimp and was beginning to catch on fire. Not good. Luckily, I was able to control the flames and still salvage the shrimp. They were tasty, just not coconutty — and with a bit of a sweet char.

Next time I want to do coconut shrimp on the grill, I think I will marinade the shrimp in coconut milk for an hour or so before putting them on the grill. I think that will be met with a much higher success rate.

But not everything has been a failure! I have finally figured out the perfect way to cook quinoa — and I have The Kitchn to thank for that. I’ve used this method a few times and every time it results in the perfect, fluffy batch of quinoa. Quinoa is so much better when cooked properly, by the way.

I still owe you a recap of our eating adventures in Charleston. Spoiler alert: everything was amazing. We are heading to Las Vegas tomorrow for our anniversary trip — where we will also be eating quite a bit — so I will have a combined eating recap when we return.

Blog hijacked! I’m taking control of Katy’s blog to talk about a three-course meal I made (with her help) for Sunday dinner: Chicken francese, homemade mac and cheese, and a tomato and corn salad. Technically, there was a 4th course: Brownies! But I don’t think using Ghirardelli Dark Chocolate Mix counts here. (Just a note about me, one of my favorite foods is chocolate so if I really did hijack this blog, it would look like Willy Wonka swooped in since every post would be of treats.)

One of my New Year’s resolutions was to cook something healthy and homemade at least once a week. Recently, I have made dishes like pasta salad with chopped cucumber, garbanzo beans, roasted red peppers and goat cheese and Mediterranean flat bread pizzas with hummus and fire roasted tomatoes — with Katy acting as my sous chef

These are step-ups from my single days when I was mastering the art of cooking spaghetti and frozen pizza. The three-course Sunday meal below is another small step for me, and one giant step for your taste buds (if you don’t know, Katy loves space-related things).

This meal is recommended for 3-4 people (or leftovers for 2 people), so it didn’t hurt that her mom joined us for dinner. She gave it rave reviews, as did we. It didn’t hurt that the wine you use for the chicken francese recipe can also be used to drink, too.

The first of two things I recommend (besides drinking the wine) is to make the salad before anything else and set in the fridge so the flavors soak together. The cold, crispness of the salad compliments the non-healthy creaminess of the mac & cheese. The other recommendation is to prepare/cook the chicken while the mac & cheese is in the oven. This is so both dishes come out hot and ready at the same time.

Here was the spread: 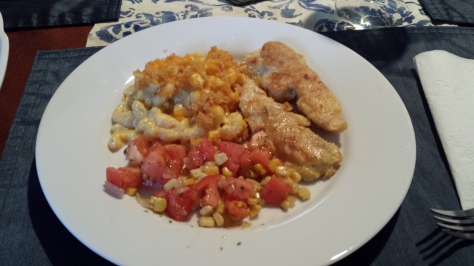 The Chicken Francese recipe was via Rachel Ray. I followed it pretty closely, subbing in chicken tenderloins for the chicken cutlets since that is what we had on hand. The recipe also calls for the chicken to be served alongside pasta or bread, but we had enough carbs coming from one of the side dishes…

BAKED MACARONI AND CHEESE. We used this recipe, which was rated as one of Food Network’s Top 10 best recipes of 2013. Katy handled the majority of the prep for this, which included making a roux and then a bechamel. But It was worth the effort.

We figured we should have some sort of vegetable on the plate to counteract the pan-fried chicken and carb-filled mac and cheese. We had some tomatoes on hand and I thought we could whip up some sort of salad to go with it. So voila. This was what we came up with. We used frozen corn since, but this would be so much better with fresh corn on the grill come summetime.

1) Heat one tsp of olive oil in a skillet over medium high heat. Add the shallot and saute until translucent. Add the corn and cook for about five minutes.

2) Add the warm corn to a bowl with the diced tomatoes. Sprinkle on the Sunny Paris and the salt and pepper and mix together. Let cool in the fridge until ready to serve.

The other night while scrolling through my blog roll, this article from The Kitchn popped up and I immediately bookmarked it. It basically talks about food bloggers don’t usually post about the ordinary things they cook and eat. They try to make every post about something amazing or groundbreaking. But not everything that comes out of the kitchen is something new and amazing.

I’ve been feeling bummed about my lack of posting as of late, but the truth of the matter is, that is the way life goes sometimes. While Eric and I are getting in to our new routine with my new job — not going to lie — there’s been a lot of convenience food for dinner. Frozen pizzas. Eating out. And as a lover of cooking and food, it pains me. But there has been nothing as of late that has felt worthy of sharing on here and I don’t want to clutter your feed with less than stellar posts.

But that is also a cop out. Just because I haven’t been cooking doesn’t mean I don’t have stuff to share. Until I get back in the routine of trying out new recipes and what not, I am going to try to at least blog about what I’ve been doing or loving at the moment. For example, if you are in the market for a frozen pizza and can find California Pizza Kitchen ones on sale near you (they can be kinda pricey), the Greek one is excellent. Thin crusted, delicious flavors. I highly recommend it. It’s a great easy dinner served alongside a salad or some quickly cooked up veggies.

There should be a post going up soon from Eric about the meal we (mostly he) cooked this weekend when my mom came over. And one of the recipes is definitely worth sharing. I just have to get him to write it. If you know Eric in real life, tell him to get on it!